DORAL, FL – (May 16, 2019)— Before a foundation had been poured or walls erected, Easton & Associates landed a tenant for a new industrial development set to break ground in Hialeah Gardens fronting the Florida Turnpike. The location is 14600 NW 112 Avenue.

Interglass Corporation, a Miami-based tempered-glass distributor and fabricator, signed a deal to move its manufacturing operation to the 65,500 square-foot building that is being developed by Medley-based CanPen Holdings. This is the first development project for CanPen, a newly formed company whose principals are—Jose “Pepi” Cancio, Jr. and Mario Penzo.

Easton & Associates President Jose Hernandez-Solaun represented both the landlord and tenant, who signed a 25-year lease. Interglass is leasing the entire building.

“Being our first project, it was very comforting to know that we had a long-term quality tenant lined prior to the walls going up,” said Penzo. “Easton & Associates has strong relationships with end users of warehouse/industrial space and was able to put together a deal very quickly.”

As this building moves forward, Hernandez-Solaun said CanPen already has its eye on developing a separate parcel in Hialeah Gardens with a small-bay warehouse project designed for 26 bays that 2,800 square feet each. Easton has been tapped to lease that property as well.

“Despite the high demand for small-bay space, there has been no significant new product delivered to the market recently due to high cost of land and construction,” said Hernandez- Solaun. “Our client had the foresight to purchase the land some time ago and the ability to deliver a great product.” 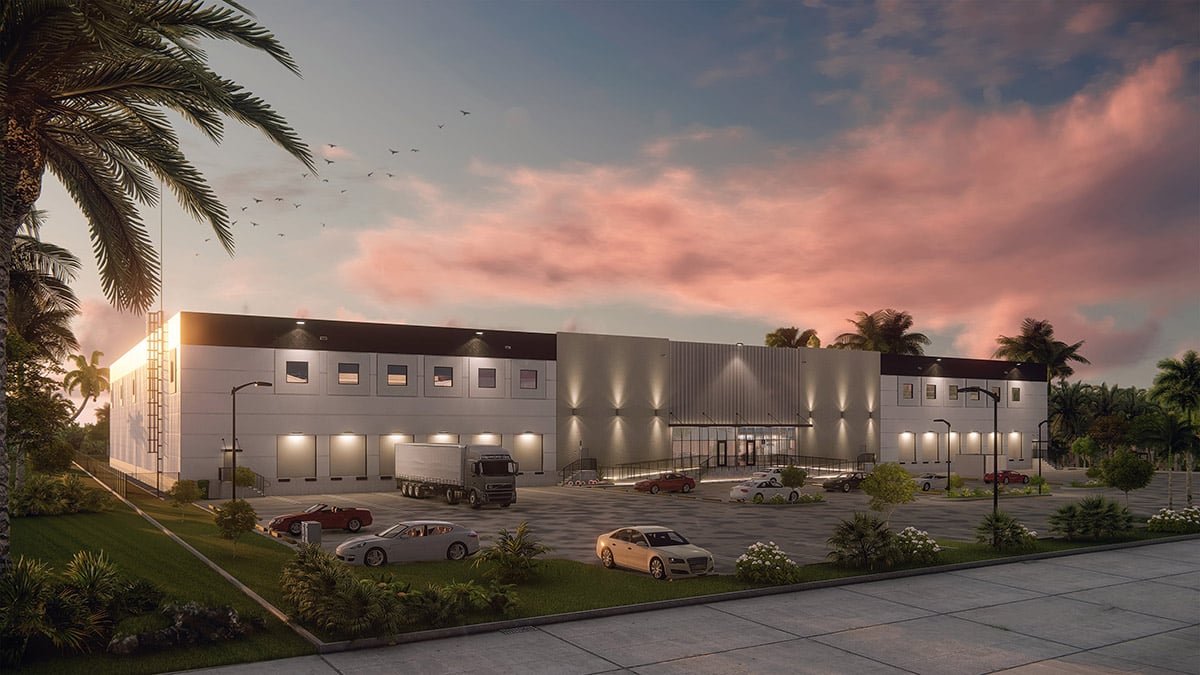 DORAL, FL – (March 15, 2019) — Easton & Associates has arranged a new 70,500-square-foot-lease of industrial space in Medley to a paper cup manufacturer that is expanding its business. Dalton Easton of Easton & Associates represented the tenant, ConverPack, Inc. The landlord, First Industrial, was represented by Cushman Wakefield’s Gian Rodriguez and Wayne Ramoski.

ConverPack already has an 80,000-square-foot facilityin Medley, but needed the additional space to fulfill a large order for paper straws for one of its national fast food customers.

“One of the challenges was finding the right space in a very short time frame so our client could ramp up to meet the demands of the new business,” said Easton. “Once we identified this property, the landlord was extremely flexible in making the deal happen.”

Prior to signing the long-term lease at 901 Yamato Road, the company’s employees worked from three separate offices in Boca Raton and Oakland Park.

“Our client desired to consolidate all of its operations into one contiguous space,” said LaBreche. “We were able to identify a location to accommodate their existing workforce as well as additional capacity for future growth.”

LaBreche said the new location in The Park at Broken Sound is ideal for corporate occupiers with larger footprints that want access to building amenities as well as housing and retail for their employees. Developers are active in the submarket adding more multifamily housing to create a true mixed-use live/work/play environment.

“The North Boca Raton submarket is performing well as an economic alternative to the East and West submarkets,” said LaBreche. “We anticipate further rent growth and net absorption as technology and healthcare companies continue to expand, coupled with no new office deliveries this cycle.”

FlexShopper, LLC, is a financial and technology company that provides brand-name durable goods to consumers on a lease-to-own (LTO) basis through its ecommerce marketplace (www.FlexShopper.com ) and patent lease-to-own pending payment method.

Somfy previously operated out of a 28,000 square-foot flex building in Boca Raton that was functionally obsolete for their distribution needs. The company directed the Easton team to find a new, larger facility in proximity to their workforce that could accommodate their growth without increasing real estate spend.

“Through a comprehensive site selection process, we identified a building which allowed Somfy to expand their footprint by 60 percent with higher ceiling heights for more efficient racking,” said LaBreche. “We grew Somfy from 28,000 to 44,000 and at the same time reduced their gross annual real estate costs year over year.”

“Working directly with Somfy’s CFO helped streamline the decision-making process and allowed us to more effectively deliver a result that met all of our client’s requirements,” said Easton.

The new 44,000-square-foot facility is located at 1200 SW 35th Avenue, Boynton Beach, Florida, in an industrial park just west of I-95 near Congress Avenue.

Exeter’s Nick Sands represented the company in the transaction.
For headshots and property photos, click on this link:

About Somfy Systems, Inc.
Somfy, the global leader in the manufacturing of strong, quiet motors with electronic and app controls for both interior and exterior window coverings, has North American headquarters located in Dayton, NJ. Over 270 million users worldwide enjoy the more than 150 million motors produced by Somfy. During the past 45+ years, Somfy engineers have designed products for both commercial and residential markets to motorize window coverings such as interior shades, wood blinds, draperies, awnings, rolling shutters, exterior solar screens and projection screens. Somfy motorization systems are easily integrated with security, HVAC and lighting systems providing total home or building automation. For more information, visit www.somfysystems.com.

DORAL, Fla. – (xxxxxxx) – The Miami Foundation has appointed Jose Hernandez-Solaun, president of The Easton Group, to its Board of Trustees for a 3-year term. He is one of five new volunteer board members added this year. Their role is to advise the organization on important issues in the community and make introductions to potential donors. The nonprofit Miami Foundation partners with corporations, families and individuals to create personalized philanthropic funds and promote civic engagement.

“I am extremely honored to be part of the Miami Foundation, the premier philanthropic organization in the county,” said Hernandez-Solaun. “I have been associated with charities in the past that have benefited from the organization’s generosity, so I have seen firsthand the important work they do. I think being on that side gives me good perspective for this new role.”

Hernandez-Solaun has been an active member in the local community over his career. He is a past chair of the American Diabetes Association Miami-Dade chapter and a former member of the national organization’s corporate board. He is also a former chair of the MIT Enterprise Forum of South Florida, and current chairman of his own foundation. Most recently, Hernandez-Solaun and some entrepreneurial-minded business colleagues, formed a new charity called LIVE (Lead-Innovate-Volunteer-Empower) that raises money in the community for several nonprofit organizations for need-specific initiatives.

As president of The Easton Group, Hernandez-Solaun oversees a company which manages, leases, develops and/or owns more than 4.5 million square feet of commercial real estate. Previously, he spent 15 years at GE Capital as a senior vice president.

About The Miami Foundation:
Since 1967, The Miami Foundation has used civic leadership, community investment and philanthropy to improve the quality of life for everyone who calls Greater Miami home. The organization partners with individuals, families and corporations that have created more than 1,000 personalized philanthropic funds. The foundation has awarded more than $250 million in grants and currently manages more than $300 million in assets. For more information, visit miamifoundation.org.

In a separate transaction, Armstrong and Waite represented Seagis Deerwood in renewing a lease for 11, 120 square feet of industrial space at 13868 SW 119th Avenue in Miami. The tenant is Tech Optics, Inc. which manufactures and distributes cartridges for laser jet printers.

CIASF bestows the award on someone who is a “consummate professional” within the South Florida commercial real estate industry. Nominees are considered for top standards in ethics, integrity and best practices at work and in the community.

“Mr. Easton’s involvement in the Greater Miami area through community service, his impact on commercial real estate through legacy development and his influence as measured by the number of people he’s trained in the profession epitomize him as an award recipient,” said Patricia J. Birch, a CIASF board member and part of the nominating committee. The Lorenzo Arce Award is named for a founding member of CIASF.

“I want to thank the organization for this wonderful honor,” said Easton, chair and CEO who founded the company more than 40 years ago. “To be honored for something you have a true passion for, especially by your peers, is both humbling and gratifying.”

The CIASF honored Easton and other commercial real estate professionals during a special dinner last month in Miami.

About CIASF:
The CIASF was founded as the Industrial Association of Dade County (IADC) in 1980 as an organization of business leaders involved in development, design, construction, sales, and the leasing of industrial warehouses and commercial properties in South Florida. In 2006, the organization changed its name to CIASF to allow better service to the commercial and industrial segments of the market. With over 250 members, CIASF is a marketplace leader for South Florida’s top commercial real estate professionals, affiliates, and service providers; and an advocate for the industry. For more information, log onto ciasf.com.

Jose A. Hernandez-Solaun is Named President of The Easton Group

(Doral, FL)—February 24, 2014— The Easton Group, a full-service commercial real estate firm based in Doral, FL, announced that corporate finance executive Jose A. Hernandez-Solaun has been hired as its new president.  In his role, Hernandez-Solaun will work with Easton’s investment partners and oversee day-to-day operation of the company which manages, leases, develops and owns more than 4.5 million square feet of commercial real estate in South Florida and outside of the state.

Prior to joining The Easton Group, he was a senior vice-president at GE Capital, a division of General Electric.  Based in South Florida most of his career,  Hernandez-Solaun spent 15 years at GE Capital assisting C-level executives of mid-market companies with their financing needs.  While at GE, he attended classes at the John F. Welch Leadership Development Center and achieved Green Belt and simpleLEAN certification in Six Sigma methodology.

“Jose has the right skillset to help lead us through our next phase of growth,” said Edward W. Easton, chairman and founder of The Easton Group. “He not only brings the structure of a corporate environment, but he also thinks like an entrepreneur which is an important asset for our business model. In addition, he is a South Florida guy who knows the market well.”

“I had a very good situation at my prior company, but when I got the opportunity to work for Ed Easton, who is one of the most successful and respected figures in the commercial real estate business, it was an opportunity I couldn’t pass up.  We have exciting times ahead of us and I’m truly excited to be part of the team steering the ship.”

While at GE Capital, Hernandez-Solaun simultaneously co-founded LEAD305, an open-source leadership platform for South Florida’s future leaders.  He also founded the Hernandez-Solaun Foundation, which educates young adults on the basics of personal finance, credit and business fundamentals.  In addition to chairing his own foundation, Hernandez-Solaun also chairs the American Diabetes Association for Miami-Dade and Monroe Counties and is a committee member for the national organization.  In addition, he chairs the MIT Enterprise Forum of South Florida.

Hernandez-Solaun holds a BA in Entrepreneurship, Marketing and International Business from Florida International University. He received his MBA in 2005 from the University of Miami.  In December 2009, he earned an Executive Certificate in Strategy and Innovation from Massachusetts Institute of Technology.

About The Easton Group:

Edward W. Easton is founder of The Easton Group, a family-owned, boutique commercial real estate firm with more than 35 years of experience and an exceptional track record. The group is broken down into four business units consisting of commercial real estate investment, development, brokerage, and property management.  The company has experience in South Florida, Texas, New Jersey, North Carolina, Ohio and Alabama and has more than three million square feet of industrial, office and retail space in its portfolio. The Easton Group is headquartered at International Corporate Park in Doral, Florida.